Do I Need a Prenuptial Agreement?

So you’re getting married. Congratulations! Becoming engaged is often an exciting and busy time. There’s a wedding to plan, perhaps a honeymoon to book, and a myriad of other ways in which two lives must be combined. Many engaged couples may also wonder: Do we need a prenuptial agreement?

In this blog post, we’ll cover what a prenuptial agreement is, who needs one, how to create one, and what happens if you don’t create one in California.

A prenuptial agreement (aka “prenup”) is an agreement entered into before marriage that outlines what will happen to the income and assets owned by each partner in the event of divorce, separation, or death.

By creating this legal document, you can indicate that the separate property you owned before your marriage will remain separate (meaning yours alone), instead of being subject to California community property laws.

You may wish to create or update an Estate Plan and a prenuptial agreement at the same time as you prepare to marry. That way, you can include your future spouse in your Estate Plan and/or ensure that any children you may have from a prior marriage will still receive an inheritance when you pass away.

Why Create a Prenuptial Agreement?

Here are 4 reasons you may want to create a prenuptial agreement:

#2 You want to avoid a long, messy fight over money if you ever divorce. Most couples don’t get married planning to later divorce. But keep in mind the divorce rate; 40-50 percent of marriages end in divorce, and that number rises for subsequent marriages.

If your marriage is one that ends in divorce, a prenuptial agreement helpfully specifies how your property will be divided and whether either spouse will receive spousal support or child support.

You can use both an Estate Plan and a prenuptial agreement to protect your children’s future inheritance. Without a prenup and Estate Plan, a large portion of your property may go to your surviving spouse after your death.

Who Needs a Prenuptial Agreement?

In the past, prenuptial agreements were sometimes thought of as being only for the very wealthy, or for marriages where one future spouse had a much higher net worth than the other. Signing a prenup was skeptically viewed as a bad omen that the marriage might not last.

In recent years, prenuptial agreements have begun to shed such previous negative stereotypes. They’re now frequently seen as a smart choice for most couples. They’re also more popular than ever, and not just amongst the super-wealthy. Sixty-two percent of lawyers say they’ve seen an increase in the total number of clients seeking prenups during the past three years, according to a recent poll by the American Academy of Matrimonial Lawyers.

Why are prenups becoming more prevalent? Here are 2 possible reasons:

#1 Marrying later in life: Many of today’s couples marry later in life compared with previous generations. By the time they marry, partners are more likely to bring financial assets, student loans, or other debt to the marriage. This makes prenuptial agreements more beneficial and necessary than they used to be.

#2 Greater familiarity with divorce: Modern-day Millennials may themselves be children of divorced parents, making them more likely to be aware of the statistical risk of divorce and more open to the idea of a prenuptial agreement.

So who needs a prenup? Creating a prenup is generally a wise choice if you have financial assets, debts, or children from a prior marriage, or if you want to gain clarity regarding your financial future. In other words, it’s a smart idea for almost anyone planning to get married!

What Happens without a Prenuptial Agreement in California?

In the event of a divorce, a judge will need to determine how the assets belonging to you and your spouse should be divided. Your prenuptial agreement will be taken into consideration at that time, provided it was created properly under California law.

Usually, community property and debts are divided equally between the two partners. But financial situations are often messier in real life than in theory. Over time, you may comingle community property and separate property. This can make it complicated for a judge to determine how the assets should be divided in the case of a divorce.

While a prenuptial agreement won’t solve every problem or guarantee a given outcome with absolute certainty, it can outline important information about what property you owned and what your original intent was for those assets at the time of your marriage.

How Do You Create a Prenuptial Agreement?

To create an enforceable prenuptial agreement, you and your future spouse will both need to find independent legal counsel. One attorney will prepare the written agreement and the other attorney will review it thoroughly and make any edits needed. Both attorneys will prepare a schedule of financial assets for the partner they represent. Once both parties agree on the final draft, both parties will execute the agreement.

Keep in mind: you’ll want to plan ahead when creating a prenuptial agreement. Your future spouse will need to have at least 7 days between first receiving the agreement and signing it for the agreement to be enforceable.

Let’s say you don’t get around to creating a prenuptial agreement before the wedding. Maybe you had a whirlwind romance, a brief engagement, and there wasn’t enough time to meet with separate attorneys before you tied the knot. Are you completely out of luck now?

If you’re engaged to be married and would like to meet with one of our attorneys to discuss creating a prenuptial agreement, feel free to contact our law firm. 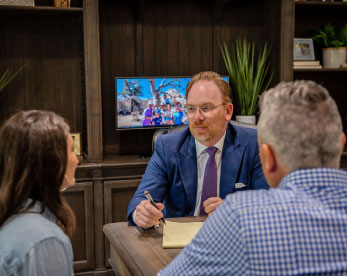 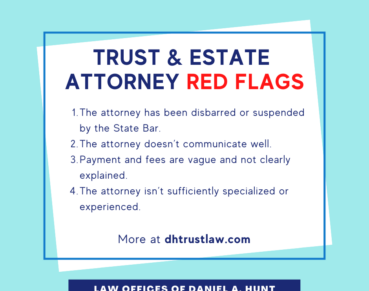 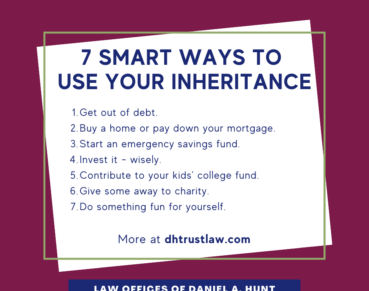 What to Do with Your Inheritance